We took the pressure gauge to measure the water pressure in each area of Greece. They were listed below：
1. The coffee shop which was located in the urban district of Athens：3.8 kg/cm2.
2. The guesthouse which was located in Athens：4.95 kg/cm2.
3. Santorini Island：2.5 kg/cm2
If you would like to know about the other tap water quality analyses in Greece, please go to this website：https://goo.gl/VppjcT

Second, the graffiti walls were surprising.
There were a lot of graffiti on the exterior walls of buildings. You could see them on the walls everywhere. It had become a feature in Athens. Even the vans also had graffiti on their bodies. It was more exaggerative than New York.

Third, their life habits were similar to the Middle Eastern countries.
Though Greece joined the European Union, their culture, diet and lifestyle were deeply influenced by the Middle East (Muslim countries), such as hookah and flea market. Almost every one could speak English here. This advantage made them stronger than the rest of European countries. It’s worth mentioning that there were lots of pickpockets in Athens. My family and I were stolen twice in these few days, and one of them was a couple of women. Fortunately, we watched out for this situation and reacted fast enough, so we didn’t lose anything. In here, the guesthouses owners and the taxi drivers kept telling us to be careful of pickpockets. 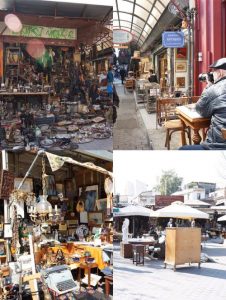 Forth, Santorini.
Because writer is a businessman, I have been to many countries. Santorini had a population of 14,000, and the land area was about 73 Km2. However, here was the second place where I had been without a traffic light. Although there were no traffic lights here, still a lot of cars were drove on the road.
According to my observation, Santorini was a rectangular island. From south to north, there were not too many intersections on the road. This might be the reason why they didn’t need traffic lights. It wasn’t like Palau. Though Palau’s population was 21,300 and the area of land were all more than Santorini, about 466 Km2 there weren’t lots of cars on the road. 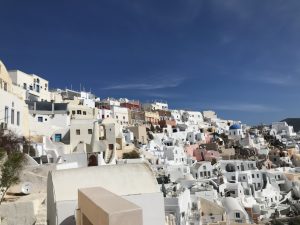 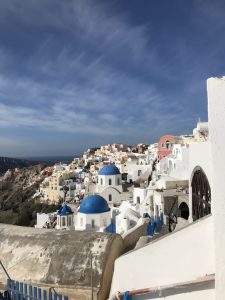