The population of Kuwait is about 3.82 million. Among them, the number of citizens is only around 1.21 million, and the other 2.61 million people is all foreign workers. Isn’t it a strange demographic structure?

The six Gulf states (GCC) produce petroleum, so residents who live in these places are rich. All their work is done by foreign workers, and Kuwait is not an exception.

In Kuwait, the policy of foreign workers is totally different with Taiwan. They don’t have any restrictions on wage and business. If you want a worker who is efficient and great ability, you need to pay more money.

In this country, even service industry also hires foreign workers. I was lodging in a five-star hotel which is called Regency Hotel. The lady in charge of checking in at the counter was a Filipino. The concierge came from Lebanon. And the woman who guided passengers was Ukrainian. The English they spoke was both standard and fluent. 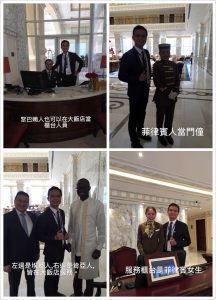 Last, the most popular household water purifier in Kuwait currently.

In Kuwait, alkaline water filter is the most popular style in the market. Most of them come from Japan and Taiwan. According to the director of Taiwan Trade Center in Kuwait, there is a manufacturer of alkaline water filter, which comes from Taichung City, Taiwan, it has accessed to this market successfully in a few years ago, and the sales performance is pretty good.